A downloadable game for Windows, macOS, and Linux

Fight through procedurally generated dungeons and collect items! Escape when you can, or stay in the fight. The choice is yours.

Every dungeon contains an infinite amount of levels and a random amount of rooms per level.

After clearing a room, there is a chance for a collectable item to spawn that can vary the playing fields by a huge amount.

Upon defeating the boss on the third level you will have the opportunity to go into the endgame, which is a final battle that spawns multiple waves of enemies. Hopefully by this point you're well equipped!

This game was inspired by the Binding of Isaac, so you may see some (or a lot!) or similarities.

Sully's Ascension only supports 16:9 resolutions, although it should work just fine on others so long as you play in windowed mode.

Xbox one / Xbox 360 / PS3 / PS4 controllers - LJoystick to move & RJoystick to shoot (Other buttons are explained in options > controls menu).

/* controllers are untested in linux so they may not work */

Keyboard & Mouse - WASD to move, arrow keys to shoot. (Other keys are explained in options > controls menu and can be re-binded!).

Please familiarize yourself with the controls in the menu before playing! And if any controller input isn't working on your end, send me an email and I might be able to work something out!

(this game should run just fine on any PC or mac)

I would like to think this game is still in development - I'm just at a point where I'm lacking ideas and some motivation, so please feel free to let me know of anything cool that could be added!

Scroll down to the community tab and make a post or email me. Videos/screenshots would be helpful, too! You can also send me the log file: 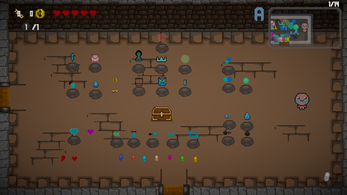